I’m currently working on a bit of a project to reduce the weight of my hiking kit. I’ll talk more about that in a future post but, for now, I’m focusing on one of the heavier items in most people’s kit; a stove.

A stove is pretty much a must-have for any hike of more than a day or so. It’s unlikely most ultralight hikers are going to be cooking real food on the go, but the ability to simply boil water allows you to make hot drinks and rehydrate camping meals. Firstly, hot food and drinks are key for morale as well as keeping warm in colder conditions, but using dehydrated food is actually a weight-saving measure since in dehydrated form they are usually pretty light, and all they require is water which can generally be sourced and filtered on the trail.

So, with all that said, I decided I wanted to find the lightest stove I could, that was also reasonably convenient and functional in wind and rain. The best option seemed to be one of the small stoves that screws on top of a standard camping fuel canister, combined with a small and very lightweight pot in which to boil water.

The options I ended up going for are the MSR Pocket Rocket 2, which is about the lightest of this type of stove as well as having a reputation for build quality and reliability, and the Toaks 550ml Titanium Pot.

On its own, the MSR Pocket Rocket 2 is just 74g, which is incredibly light. It does come in a red plastic box, which you might or might not decide to take with you hiking, and that brings the total weight up to 104g.

The Toaks 550ml Titanium pot is even lighter at 70g. If you carry it in the mesh bag (which isn’t a bad idea, to protect against scrapes and dings) that brings it up to just 83g.

That means the whole kit, if you include the Pocket Rocket’s box (which many wouldn’t) weighs a mere 187g. That compares very favourably with, let’s say, a jetboil zip at 345g although of course a jetboil has a slightly higher capacity and some additional features like the insulated neoprene sleeve.

The Pocket Rocket folds down into a tiny little shape, and then expands to have surprisingly large arms that could support a range of different sized pans, even potentially a large frying pan – although the stability of the gas canister would be the main issue there. It has a nice big wire control handle that is easy to manipulate even with cold and/or gloved hands, and would be easier to turn off without getting splashed with boiling water if the pot is boiling over – this is a constant issue on the JetBoil zip, I find.

It screws to the top of a standard canister, giving you a range of different options and sizes and, as referenced above, if you wanted greater stability you could clip a tripod to the bottom of the canister, but that is not included or needed with a small pot and a bit of care in picking your surface.

Although less well shielded from wind than the JetBoil option, the pocket rocket does have a wind baffle across the top of the gas outlet, and I had no problems with it being blown out even in quite high winds.

I was extremely impressed with how quickly it boiled water, bringing 500ml of water to the boil in around 2 mins 30 seconds. It can also be adjusted down fairly easily to allow for simmering, which is useful especially if you are doing real cooking rather than just boiling water as quickly as possible.

In common with most other stoves of this type (the small, screw directly on to the top of a canister type) it doesn’t have its own piezo igniter so requires lighting with matches or a cigarette lighter. However, this does both reduce weight and a potential point of failure, so is not necessarily a bad thing. 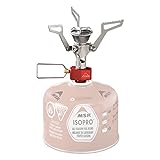 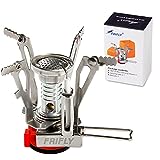 £43.26
Weight
87g
Buy on Amazon
Our thoughts
Very light, not as compact, but does include an ignitor.
Name
FRIFLY Backpacking Stove

There’s not a great deal to say about the pot. Being made of titanium, it is very, very light. It has folding metal handles allowing it to be used as a mug, although if you have boiled water directly in it you might find that it is too hot to either hold or drink from straight away. It also comes with a little lid, use of which would probably speed up boiling time and somewhat prevent water from bubbling over the top.

The mesh bag it comes in is useful for protecting it from bumps and scratches, as the material is quite thin in order to keep it so extremely light.

I love JetBoil and I’m certainly not intending to criticise JetBoils, however given that’s the stove I’m replacing it obviously makes sense to do a bit of comparison.

If you pack the Pocket Rocket away inside the pot, then the whole package is on the face of it more compact than the JetBoil. However that’s a little misleading as the JetBoil also has the option to fit a small canister inside it, which the Toaks pot does not. So, if you’re using a small canister, the JetBoil might end up being a similar overall bulk. If you’re using a large canister, which won’t fit inside the JetBoil, then the Toaks/MSR combo is definitely much more compact.

The JetBoil is substantially heavier, twice the weight or more depending on the JetBoil model you use. Of course, that does allow for greater volume with the JetBoil but even if you used a larger Toaks pot it would still be much lighter overall.

The JetBoil and the MSR/Toaks combo boiled 500ml of water in a very similar amount of time when I tested them. Although I didn’t use a thermometer so pinpointing the exact moment that the water boiled was difficult, I would estimate that the JetBoil took 10-20 seconds longer, which is not hugely significant although when you’re freezing cold and waiting for a hot brew seconds can count!

The JetBoil is not particularly good at simmering, so while it boils water very effectively it’s not brilliant for more controlled cooking.

The JetBoil is overall more fully-featured, with its neoprene sleeve and plastic lid with sip-hole allowing you to drink directly from it. It’s also got excellent protection from wind, and makes it easy to contain everything you need for cooking in a single package.

That said, the gas control on the JetBoil zip is notable small and difficult to use, especially with gloves or if water is bubbling over the top. The large wire controller on the Pocket Rocket is far better.

The Pocket Rocket also allows more flexibility to use a range of different pans depending on what type of camping you are doing, while with the JetBoil you can only easily use their small range of proprietary pans (although at a pinch you can balance a third-party pan on top).

Overall these are both great products and, while you could easily swap out either of them for other similar options (especially the pot – there are plenty of other similar ones, larger ones, heavier ones, etc.) this particular selection does exactly what I need: allows me to reliably boil enough water to rehydrate a meal or make a brew (or probably both) very quickly, in an extremely compact and lightweight package. It’s a great way to shave nearly 200g off the weight of my kit, and free up a bit of space, and I highly recommend both products to anyone doing long self-supported runs, thru-hikes, or other activities where weight is a particular concern.